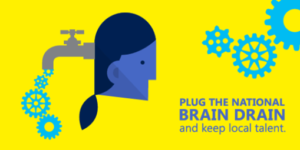 “Brain drain” is defined as the migration of highly educated scientists, engineers and intellectuals from developing to developed countries in search for better standard of living and quality of life, higher salaries, access to advanced technology and more stable political conditions than their home countries. In the last decade many of these intellectuals, scientists and engineers decided to return to their home country to start a related business, teach in a university, or work for multi-national companies. Their return to home country, after many years of employment abroad, is called “reverse brain drain”. This trend of migration of scientists, engineers and medical professionals from countries in Asia, Africa and Latin America, has led to serious concerns that the outflow of skilled professionals is adversely affecting the economy, the health system and technological improvements in developing countries. The countries with the highest “brain drain” are India, China, Philippines, Brazil, Eastern Europe countries (after the collapse of Soviet Union). The countries who benefited mostly from influx of educated professional were USA, UK, Germany, Canada and Australia. This review covers some very interesting statistical data on the “brain drain” phenomenon in developed countries in the last 30 years. The remittances home of these migrants improved substantially the economies of some countries.  Also the return of these highly educated professionals to their home countries, like China, India, Philippines, South Korea, under the new economic changes and technological development in developing countries is a more recent phenomenon that has some very interesting economic implications. At the same time, several multinationals companies moved their industrial sites in developing countries for the lower cost and the availability of highly skilled professionals.